Rural Community Works Together to Stay “Fun and Fit” 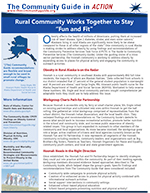 The tribal communities in rural Hoonah, Alaska used The Community Guide as a resource to help counter the increasing rates of obesity. They partnered with the Alaska Department of Health and Social Services to expand access to places for physical activity and get the community moving. (Released 2012)
View PDF

Obesity affects the health of millions of Americans, putting them at increased risk of heart disease, type 2 diabetes, stroke, and even some cancers.1 Alaskans living in rural Alaska are significantly more likely to be obese compared to those in all other regions of the state.2 One community in rural Alaska is making strides to address obesity by using findings and recommendations of the Community Preventive Services Task Force (Task Force) in The Guide to Community Preventive Services (The Community Guide). Under the guiding vision of a cross-sector partnership, the Hoonah community is working to address obesity by expanding access to places for physical activity and engaging the community in outreach activities.

Obesity in Rural Alaska is on the Radar

Hoonah is a rural community in southeast Alaska with approximately 850 full-time residents, the majority of whom are Alaskan Natives. “Data collected from schools in our district revealed that 27 percent of the general student population is overweight and 18 percent are obese,” said Sonja Engle, RN, itinerant public health nurse for the Alaska Department of Health and Social Services (ADHSS). Motivated to help reverse these numbers, Ms. Engle and local community partners sought comprehensive yet adaptable tools they could use to help address this issue.

Because Hoonah is accessible only by ferry or small charter plane, Ms. Engle relied on existing partnerships and cultivated new ones within Hoonah to get the ball rolling. She gathered an initial workgroup comprised of representatives from the school district, the Hoonah Indian Association, and the local health clinic. They reviewed findings and recommendations on The Community Guide’s website to assess what would work to increase recreational activities, promote better nutrition in the school and community-wide, and increase public awareness of obesity-related issues. This group in turn expanded its outreach to other members of the community and local organizations. As more became involved, the workgroup grew into a larger, active coalition of citizens and local agencies currently known as the Hoonah Fun and Fit Partnership. It now represents all segments of the Hoonah community including residents, community leaders, and organizations such as Big Brothers Big Sisters, Parents as Teachers, Hoonah Organizers for Peace and Equality, community youth centers, and local and state government agencies.

Hoonah Heads in the Right Direction

Once established, the Hoonah Fun and Fit Partnership began to identify strategies they could put into practice within the community. As part of their meeting agenda, workgroup members discussed evidence-based approaches described in The Community Guide, which helped shape the group’s goals. Specific findings and recommendations from The Community Guide that were considered included:

Planning sessions guided by evidence-based approaches helped the group see that solutions were achievable. “The most useful thing about The Community Guide is that it has evidence-based strategies that can be pointed out to the group,” explains Ms. Engle. “It helps the community to identify their issues and then come up with adaptable strategies to solve them.”

Strategy Moves One Village, Influences Another

Within the first year of the workgroup’s creation, members collaborated to broaden access to recreational activities and events, promote better nutrition, and alert people to the real impact of obesity in Hoonah. Key strategies included:

The workgroup’s actions rallied the entire community to combat obesity. Candy Keown, director of Human Services for the Hoonah Indian Association and a member of the Hoonah Fun and Fit Partnership, commented on the Raven-Eagle Walking Challenge, “People are excited about walking. It’s having a good effect on the community.” Residents report healthier lifestyles and increased physical activity. Marti Lee, a Fun and Fit participant, noted, “I feel much better about my health now that I have lost some weight, move more, and choose healthier food on a regular basis. The partnership has brought a positive change in our mmunity.” Hoonah’s response has influenced a nearby village to start a similar movement to combat obesity in their community. Hoonah Fun and Fit plans to collect additional data to fully measure the impact of their efforts throughout their community.

1 Centers for Disease Control and Prevention. Overweight and Obesity Economic Consequences. www.cdc.gov/obesity/causes/economics.html. Accessed on March 26, 2012.
2 State of Alaska Department of Health and Social Services. The Burden of Overweight and Obesity in Alaska, Summary Report. http://dhss.alaska.gov/dph/Chronic/Documents/Obesity/pubs/obesityburden_2009.pdf. Accessed on March 26, 2012.

State of Alaska, Center for Health Data and Statistics