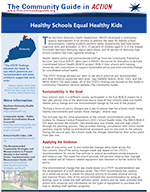 The Northern Kentucky Health Department used health-related policy and environmental findings from the Task Force to improve the health of school environments in the region. The health department used the Centers for Disease Control and Prevention’s School Health Index to measure those improvements. (Released 2015)
View PDF

“The Task Force findings allowed our team to see which practices are recommended and what evidence supported each area,” says DaNelle Jenkins, M.Ed, CHES, and the NKHD REACH CQI team leader. All of the Task Force’s findings are housed on the Guide to Community Preventive Services website (The Community Guide).

Sustainability is the Goal

Four schools, each in a different county, participated in the first REACH project for a two-year period. One of the objectives was to have all four schools make one health-related policy change and one environmental change by the end of the project.

“Putting a focus on policy changes was a way to ensure that the schools could create healthy environments and sustain those changes,” Jenkins says.

The first year was for initial assessment of the schools’ environments using the Centers for Disease Control Prevention’s (CDC) School Health Index. The NKHD REACH CQI team assisted the schools two elementary, one middle, and one high school through the planning process. They provided training, consultation with school health partners, regular follow up and technical assistance, and on-site visits to the schools. During the second year, the schools made the changes identified on their action plans from year one.

A total of nine policy and 12 environmental changes were made across the four schools. One of the policy changes made was based on the Task Force’s recommendation for smoke-free policies to reduce secondhand smoke exposure and tobacco use. This made the school grounds 100 percent tobacco-free. Signage was created and all tobacco-related equipment was removed to further enforce this policy.

One environmental change that was made based on a Task Force recommendation was the development of a staff wellness center. The Task Force recommends the creation of or enhanced access to places for physical activity to increase physical activity and improve fitness. One of the schools followed this recommendation by using an existing room to create the staff wellness center. Jenkins and her team provided that school with resources and information on the types of equipment to purchase and how to develop staff wellness programs.

Another environmental change was made based on the Task Force’s recommendation for street-scale urban design and land use policies to increase physical activity. Enhancing street landscaping is one of the design components of this intervention. One of the schools used this intervention to increase safety at student pickup and drop-off areas. Safety-related signage was installed, lines were painted on the driveway, which included crosswalks, and fencing was built.

Although the schools only used three interventions that were recommended by the Task Force, Jenkins says her team looked at other Task Force findings to inform the schools about alternative options for policy and environmental changes. For example, the Task Force found insufficient evidence for multicomponent school-based nutrition interventions†. Even so, the NKHD REACH CQI team knew it was important for the schools to address the need for healthier food options. Nutrition-related policies were created to address food allergies and one school created a provision that only allowed for healthy beverages in the cafeteria and in vending machines.

“We did not want to ignore insufficient evidence findings because we knew there were things that could be impactful even if there was not solid evidence at that time,” Jenkins says.

Her team sought guidance from other resources, including HealthMPowers, a nonprofit organization that uses evidence-based guidelines established by CDC to promote healthy eating and physical activity in schools. Also, the NKHD REACH CQI team included Registered Dietitian, Monica Smith, MS, RDN, LD, who was able to provide nutrition recommendations to schools and encourage healthier choices, and Michelle Eversole, MPA, who helped with the smoke-free policies.

In February of 2013, NKHD applied for and received five-year accreditation from the Public Health Accreditation Board (PHAB). The CQI program aligned with one PHAB’s measures for implementing health promotion strategies to protect the population from preventable health conditions. The NKHD REACH CQI team is currently working with four new schools on the third cycle of the project.

† This finding was updated and replaced by the 2016 Task Force finding for Multicomponent Interventions to Increase Availability of Healthier Foods and Beverages in Schools..

The Community Guide: Task Force Findings on Tobacco Use and Secondhand Smoke Exposure