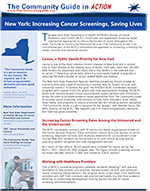 Cancer is one of the most common chronic diseases in New York, and is second only to heart disease as the leading cause of death. Each year, more than 100,000 New Yorkers are diagnosed. The New York State Department of Health Bureau of Cancer Prevention and Control coordinates multiple programs based on Task Force recommendations to increase the screening rates for breast, cervical, and colorectal cancers. Interventions include client reminders, small media, mass media, and programs to reduce structural barriers. (Released 2017)

The New York State Department of Health (NYSDOH), Bureau of Cancer Prevention and Control (BCPC) coordinates and implements evidence-based intervention approaches to reduce the burden of cancer throughout the state. The Guide to Community Preventive Services (The Community Guide) is an instrumental part of the BCPC’s comprehensive approach to increasing screenings for breast, cervical, and colorectal cancers.

Cancer is one of the most common chronic diseases in New York, and is second only to heart disease as the leading cause of death.1 Each year, more than 100,000 New Yorkers are diagnosed, and nearly one in four deaths in the state are due to cancer.2-4 Detecting cancer early, when it is most easily treated, is essential in reducing the state’s burden of cancer-related death and disease.

The New York State Prevention Agenda identifies preventing chronic disease as a priority area, with a goal of increasing screening rates for breast, cervical, and colorectal cancers.5 To achieve this goal, the NYSDOH BCPC coordinates multiple programs with support from CDC grants and state appropriation funding. The BCPC works with community and clinical service/health system partners and contractors across the state to promote evidence-based approaches from The Community Guide to increase cancer screening. Interventions include client reminders, small media, mass media, and programs to reduce structural barriers including patient navigation. “The Community Guide is a go-to resource for our bureau,” said Heather Dacus, DO, MPH, director of the BCPC. “We regularly use it to inform programmatic decisions and have had good outcomes.

Increasing Cancer Screening Rates Among the Uninsured and the Underinsured

The BCPC coordinates contracts with 35 community-based organizations known as the Cancer Services Program. These contractors reduce structural barriers to cancer screening, diagnostic services, and necessary treatment for uninsured and underinsured New York residents by linking them to no-cost clinical services and by providing patient navigation and case management services.

Then, trained practice facilitators regularly meet with practice staff to support improvements to electronic health record data and implementation of evidence-based findings from The Community Guide to increase cancer screening rates. Results from a pilot study of the program found that average screening rates for breast cancer increased by 13%, and rates for colorectal cancer increased by 5.6%.8

Surveillance data revealed that Medicaid Managed Care (MMC) members in a ten-county, primarily rural area in northern New York had notably lower colorectal cancer screening rates than other MMC members across the state. To address this discrepancy, BCPC partnered with two MMC health plans that serve the region and other NYSDOH staff who oversee quality measurement and improvement activities.

Together, they developed a plan to implement evidence-based interventions from The Community Guide aimed at providers and clients. Provider reminder and education interventions targeted 592 primary care providers and 126 specialty care providers. Client-focused education, reminders and, for some, small financial incentives*, were used to promote screening to more than 6,000 MMC members in the ten-county region.

Initial evaluation data showed that, compared with a control group, MMC members who received a client reminder plus a $25 incentive had the highest colorectal cancer screening rates, followed by clients who received reminders without an incentive. A mailed survey with telephone follow-up is ongoing to assess barriers to screening in this population.

The BCPC oversees two media campaigns aimed at increasing cancer screening. The Don’t Wonder Know! campaign combines mass media* with small media to promote colorectal cancer screening among people ages 50 years and older. Three public service announcements are targeted to communities with higher colorectal cancer rates through television, radio, social media, and print channels that include newspapers, bus shelters, subways, and store fronts. Brochures and posters with consistent messaging are distributed to contractors and partners and made available to the public. Cancer Services Program contractors use peer educators to convey the importance of early detection through group* and one-on-one education. A separate mass media* intervention aims to increase breast cancer screening by highlighting known barriers to screening and reminding women about the importance of early detection.

In 2016, New York State passed legislation put forward by Governor Cuomo to reduce structural barriers to breast cancer screening. The legislation extends hours for mammography screening at over 200 hospitals across the state to include an additional four hours per week outside of the typical 9 to 5 workday.

It also extends a previous law that entitled municipal employees to four hours of paid leave for breast or prostate cancer screening to include municipal employees in New York City. An additional law that goes into effect in 2017 eliminates annual deductibles, co-payments, and co-insurance payments for screening and diagnostic imaging for the detection of breast cancer. Decision makers considered Task Force recommendations for interventions to reduce structural barriers and out-of-pocket costs to increase cancer screenings as they were drafting these laws.9