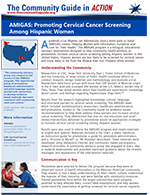 The AMIGAS program engaged community health workers, or promotoras, to deliver a multicomponent intervention that doubled the rate of cervical cancer screening among Mexican-American women in Texas and Washington. Community Preventive Services Task Force recommendations were used to inform the selection of program components which included one-on-one education and small media. (Released 2018)

Researchers at CDC, Texas Tech University Paul L. Foster School of Medicine, and the University of Texas School of Public Health combined efforts to conduct formative research, design materials and methodology, and evaluate a trial.2,3 Researchers held focus groups with more than 500 women of Mexican origin in the El Paso area and surveyed 200 women at the U.S. Mexico border near El Paso, Texas. They asked women about their healthcare experiences, knowledge about cancer, and feelings regarding Papanicolaou (Pap) tests.

Results were also used to inform the AMIGAS program and create materials in English and Spanish. Materials included a flip chart, a video, handouts, an instruction guide for promotoras, a guide for promotora administrators, and a “Promise to Myself” or “Mi Promesa” worksheet. These materials were developed using behavioral theories and community-based participatory research principles. A community advisory group was engaged at every step in material development and provided important guidance about the content, messages, and appearance of the intervention materials.

Promotoras were selected to deliver the program because they were an important source of health information in the Mexican-American community. They shared, or had a deep understanding of, their clients’ culture, understood the nuances of their concerns, and were familiar with community resources. Trained promotoras from within the target communities were uniquely qualified to help alleviate fears, correct false assumptions, and help women understand the importance of getting screened for cervical cancer regularly.

During one-on-one sessions, promotoras met with clients and shared bilingual program materials to explain the importance of cancer screening for early detection. Clients were encouraged to use a set of message cards to share their concerns with the promotoras, and ask questions without fear of being misunderstood or embarrassed. The AMIGAS team developed the cards based on survey and focus group results, which found some women had a mistrust of doctors or concerns about embarrassment or pain associated with Pap tests.

A research trial was designed to evaluate the effectiveness of the AMIGAS program. In the trial, 613 women from border (El Paso, Texas), urban (Houston, Texas), and rural (Yakima, Washington) regions in the United States were randomly assigned to one of three study arms or a control group. The first study arm received the full AMIGAS program with a video and flip chart, the second arm did not watch the video, and the third arm did not see the flip chart. The control group did not receive any of the AMIGAS program materials.

Cervical cancer screening rates were significantly higher among women who participated in any arm of the AMIGAS trial when compared to women in the control group. Within the first six months, 52.3% of women in the first study arm had been screened for cervical cancer, compared with 45.5% in the second arm, 41.3% in the third arm, and 24.8% in the control group.3 These differences persisted when researchers examined the results by location.

Community health centers, health departments, and other agencies can use the to increase cervical cancer screening rates among Hispanic women in their communities.

The AMIGAS program materials are available online free of charge.